If you’d prefer to have all of this information in video form here’s a video that goes over about 90% of the information:

Frost and Fire is a Kenshi inspired RimWorld full conversion mod. The mod is intended to be played as an ultimate survival scenario, which will be extremely difficult and radically changes traditional tactics and strategies. This project is a result of the Rhadamant Plays community proposing an extreme temperature challenge, and that proposal won in a public poll by popular vote. The mod is intended to be played with the associated scenario for maximum challenge and balance, and ideally, the accompanying save game file so that everyone starts on equal footing. The rest of the information provided here may be considered spoilers, so if you wish to try Frost and Fire as a blind attempt, please read no further than the installation guide, scenario and community challenge. 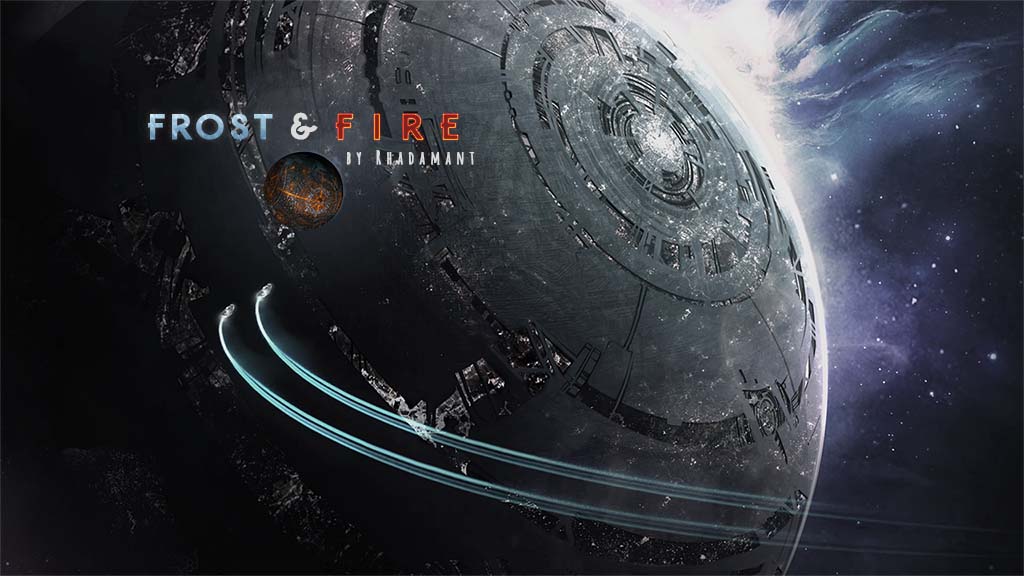 The minimum requires to play Frost and Fire is the following:

How to use a downloaded save game file (or scenario): Click here for a brief tutorial

Royalty: Frost and Fire is built to support Royalty, but there are two separate scenario files, one for Royalty and one without. The benefits of Royalty are severely diminished due to the fact that the Reapers are entirely immune to psycasts and wood is a very limited resource.

Using your own Scenario / Map Seed – Setup and Requirements:

Faction Control – Remove all of the vanilla hostile factions ( savage tribe, fierce tribe, rough outlander union and pirate band ) so that your attackers will be Reapers or Mechanoid Hives.

Custom Climate Cycle: If you plan on creating your own scenario for Frost and Fire here are some important tips to setup the world so that it will behave correctly. You’ll need to add the scenario part “Custom climate cycle” with the following settings:

If you do not add this, the temperatures will not swing dramatically between scorching or frigid. The period offset is important because it aligns the sinewave of the climate cycle to the seasons, so for that reason you must start your new game at the start of autumn. Additionally it is the most balanced if you live very close to the equator. The temperature factor is how much hotter and colder the temperatures will range, and the temperature offset adjusts the average temperature.

Compatibility: Frost and Fire is not supported what-so-ever outside of the intended use as a conversion mod and stand-alone challenge. Quality of life mods and UI mods should be compatible with Frost and Fire, but many mods will not be, because Frost and Fire significantly patches the base game to remove vanilla creatures, meats, eggs, leathers and more. The save file provided for the community challenge has the absolute bare minimum of mods enabled, you’re welcome to add your own, but if they don’t work don’t ask me to fix it, I won’t.

Frost and Fire is balanced when used in conjunction with the Frost and Fire scenario, without the associated scenario the mod may not offer sufficient challenge. The Scenario for the community challenge removes a lot of the more beneficial events and incidents so that you cannot rely upon ‘good luck’ for survival. You’ll start off with 4 carefully planned out, but not overpowered pawns that are survivors of a spaceship wreck. Upon landing on the hostile mechanoid planet you’ll have to quickly scramble in order to insure any hope for long term survival. Here are the disabled events for reference:

Community Challenge is the way Frost and Fire was meant to be played.

Here are the settings:

Why should you try the community challenge? If we all follow the rules listed above, our experiences of surviving Frost and Fire will remain relatable. We can share our struggles, our successes and our screenshots and everything we share will have the same common reference point, which makes Frost and Fire a community event. I truly hope you all enjoy the time you spend enduring the brutality that is Frost and Fire.

Frost and Fire replaces all of the vanilla biomes with a custom biome designed by Sarg, the author of Alpha Biomes. The entire world is a metallic machine world, severely lacking biodiversity. The machine world has an extreme elliptical orbit, which means that the summers can easily reach boiling temperatures and inversely the winters are bitter cold. As a result of the wild temperature variations and the fact that the majority of the planet is metallic, plants barely grow on the surface of the world, so most of your calories must come from hydroponics, clever farming, ranching or hunting. The world will offer you an abundance of steel and slag, but if you’re wanting other building materials you’ll likely have to salvage, scavenge and barter for them. 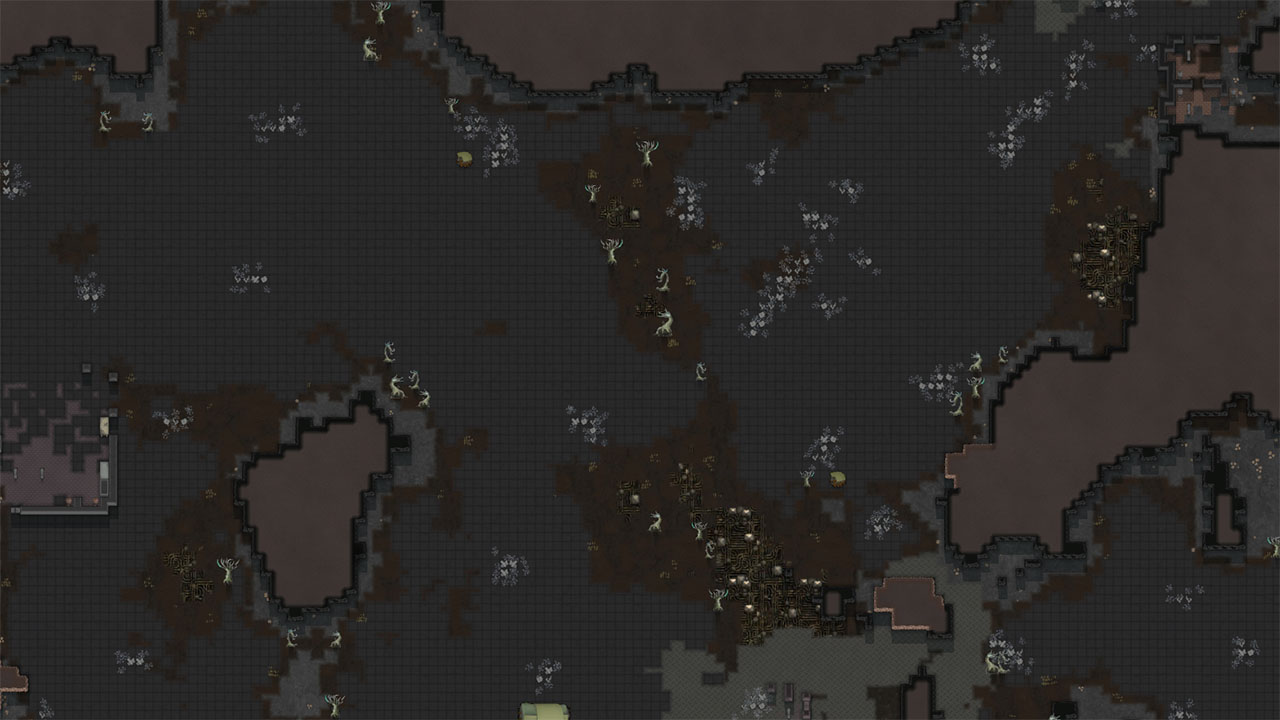 Frost and Fire removes all vanilla animals and replaces them with Kenshi inspired animals, which are far more dangerous and aggressive than their RimWorld equivalents. Many of the Kenshi animals will be faster and stronger than you are used to, and also often yield far less meat, or just foul meat instead. They’ll hunt in packs and attempt to eat you alive. They’re also far more adapted to the biome and won’t be as impacted by the extreme temperatures. Frost and Fire also adds ‘domesticated’ animals provided in this modpack that can act as haulers, caravan animals and ranch-able animals. They’re not as well adapted to the extreme temperatures, but may provide benefits to your colony.

Here’s the beastiary not to scale

Frost and Fire introduces a new enemy, Reapers. The reapers are inspired by the Kenshi race Skeletons, and based on a mod that was originally made by Sharpedo-Dressed Man and modified heavily by me, Rhadamant. Reapers are remorseless robots who feel no pain, are much tougher than organic attackers and are trying to wipe out organic life. They’re totally unaffected by the drastic temperature shifts of the planet and are seemingly immune to all psychic attacks. They are a cross between the traditional mechanoids of RimWorld and regular marauder/pirate raiders. The Reapers also have their own unique race-specific armor, weapons and abilities that were carefully balanced to fit well within RimWorld. Reapers are still hostile with mechanoids and you may have opportunities to pit them against one another.

To dramatically increase the amount of interactions with Reapers, the Frost and Fire scenario is designed with Faction Control to remove the savage tribe, fierce tribe, rough outlander union and pirate band, leaving you only with a civil outlander union faction, civil tribe faction and reapers. This causes a much larger percentage of your raiders to be Reapers and Mechanoid Hive. The shattered empire will also be included if you have the Royalty DLC and there are two copies of the original save game file, one with Royalty and one without to accommodate everyone.

Frost and Fire introduces a very large variety of new arms and armors, but race restricts them for Reaper use only. All of the weapons and armor are directly inspired by Kenshi. The armor and helmets were sourced from Sharpedo-Dressed Man’s mod, Kenshi Apparel. The new weapons that Reapers wield were made by me, Rhadamant. All of the armor and weapons are carefully balanced to fit within the existing arsenal that is available in vanilla RimWorld, while feeling unique and unfamiliar. The weapons, helmets and armor was made to be race restricted so that you cannot scavenge the Reapers to dramatically improve your own equipment. This increases the challenge of Frost and Fire and makes sense lore-wise because the armor that is bolted on to robotic skeleton bodies ought to be unusable to organic humans, and the weapons are all biocoded.

Here’s the arms and armor

This, and much more.

Can I play as the Reapers? No.

Can I use Reaper equipment? No.

Was this mod created as a community challenge? Yes.